This year’s Met Gala was “eventful” you could say. The theme for this year’s met was “Guilded Glamour”. For those who do not know Guilded Glamour references to America’s fashion during the Guilded Ages. We saw some attendants hit the bullseye and others miss the target completely. So, let’s break down some looks from this year’s 2022 Met Gala.

In my opinion, Blake had one of the best looks of the night. She walked in wearing a copper and orange jewel-toned gown inspired by Versace. With extra warm-colored fabric in the front of the dress shaped like a bow, she untied it to reveal a teal and bronze gown. Serving us double realness her look as well as the meaning behind the dress was just the chef’s kiss. She said “I arrived copper and the like New York City classic architecture, I patinaed. This dress is an homage to New York City and so many classic iconic buildings. The top of my dress is detailing from the Empire State Building, some of the dripping from the statue of liberty. The back is the constellations from Grand Central Station painted there. And even my crown has seven spikes because the Statue of Liberty she has seven spikes representing the seven seas, and the seven continents. Which represents inclusivity, welcomeness, and freedom.” Overall the look was perfect including the deep meaning behind New York’s Gilded Age was the cherry on top.

This year, Laura did not disappoint. Wearing an H&M black ballgown with thousands of glimmering silver crystals and long silk gloves to top off the look it was an absolute masterpiece. Topping the night with a gorgeous gilded look she no doubt had one of the best outfits of the night. In an interview with E! she said “I just wanted to take the theme with the shape of the dress. I was really excited to go full ballgown because I’ve never been able to have that moment at the met so this really felt like the appropriate time to do it.” Looking stunning and glamorous as always she nailed this year’s theme to a tee. Billie always understands the assignment. Wearing Gucci, her dress is to die for. With the array of pastels and tight-fitting corsets along with tight-fitting sleeves and a gorgeous flower in the middle, she was the moment. Billies entire outfit was made from existing material as her goal was to be as eco-friendly as possible. Overall, her look as well as the dress had the IT FACTOR!

Genesis Suero was not invited as an attendee to the Met but as a reporter. After a picture of her look went viral on Twitter, everyone was trying to figure out who this majestic woman was. Suero was Miss New York USA in 2018 and ended up hosting special red carpet coverage for this year’s met. Giving us full gilded realness Seuro wore a stunning gold beaded gown by designer Lucia Rodriguez and was a full-on showstopper. Looking like a Disney Princess Suero showed up many celebrities with her astounding look. 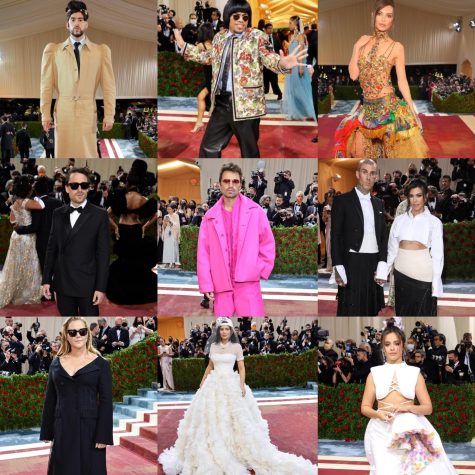 Your donation will support the student journalists of Dakota High School. Your contribution will allow us to purchase equipment and cover our annual website hosting costs.

Donate to The Dakota Planet
$145
$1000
Contributed
Our Goal
Submitting donation...

Thank you for your donation!